Let's discuss the future of urban mobility and transportation

Our Document Center is a collection of useful and informative documents and references on topics discussed in the CEO's Blog. 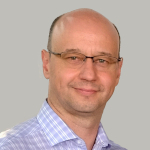